Conflict-related sexual violence is massively enabled by the presence of illicit weaponry in civilian hands, or the misuse of government-owned arms. UNODA works with its many partners to regulate weapons flows, secure arsenals, prevent gun trafficking, and reverse the excessive accumulation of arms. The issue of ‘small arms’ is particularly gender-relevant. That is why UNODA promotes participation of women in peace and security at all levels, training security forces, fostering community violence reduction, and assisting young men to explore paths towards increased security and prosperity that do not involve illicit gun ownership.

Officials in the Central African Republic held a multi-day training last month to further harness their small arms control practices and policies in support of gender equality and related priorities.

Over three days of presentations and interactive exercises organized in Bangui by the United Nations Regional Centre for Peace and Disarmament in Africa (UNREC), Government and civil society participants boosted their readiness to systematically weave gender considerations into national and local small arms control efforts, in line with the women, peace and security agenda. The training was part of a multi-year global project led by the United Nations Office for Disarmament Affairs (UNODA) with funding from the European Union.

The programme ran from 13 to 15 October 2020, and its 30 attendees included representatives of the national commission for small arms and light weapons control (COMNAT-ALPC); the Ministry for the Promotion of Women, Family and Child Protection; the National Technical Committee for the Programme on Disarmament, Demobilization and Reintegration, Security Sector Reform and National Reconciliation; the National Police; the Customs Agency; the Ministry of Justice; and civil society organizations, including locally based members of the International Action Network on Small Arms (IANSA).

While acknowledging limitations in the available information and data, Ms. Munoz said that a significant  number of firearms in the country are unregistered and illegally held. She went on to explain various ways that gender affects the use of small arms and light weapons, emphasizing how their proliferation and misuse can impede efforts to build peace and stability.

Ms. Munoz went on to discuss the latest figures on homicide rates by sex from the United Nations Office on Drugs and Crime. Since the beginning of the COVID-19 pandemic, she said, there have been signs of an exponential increase in gender-based violence in and beyond the Central African Republic. Ms. Munoz ended her remarks by quoting the Secretary-General’s call this year for an “end to all forms of sexual and gender-based violence.” 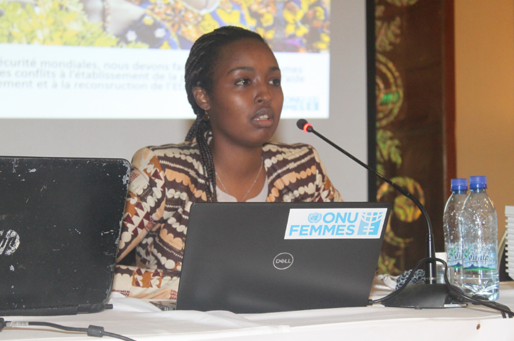 Next, Ms. Novella Nikwigize and Mr. Ulrich Sandy of UN Women divided the participants into smaller groups to discuss gender terminologies and concepts of masculinity related to small arms ownership and misuse. The breakout discussions touched on processes for disarmament, demobilization and reintegration; social norms that affect how women and men are perceived in their communities; and how men and women are impacted differently by armed violence.

Mr. Jean Pierre Betindji, Executive Secretary of the Central African Republic’s National Commission on small arms and light weapons control (COMNAT-ALPC),  updated participants on the implementation of the country’s 2019-2022 National Action Plan on small arms and light weapons control, including its gender dimensions. Mr. Theodore Koinam, national focal point of the Central African Republic for the women, peace and security agenda, welcomed the efforts of Betindji’s commission to ensure that gender considerations were integrated throughout the National Action Plan. In concluding remarks, both representatives called for the National Commission and the Ministry for the Promotion of Women to strengthen and broaden their collaboration on all four pillars of the women, peace and security agenda—participation, prevention, protection, and relief and recovery.

Mr. Sylvestre Kibeceri, United Nations Mine Action Service Capacity Development Advisor, presented the strategy of the United Nations Multidimensional Integrated Stabilization Mission in the Central African Republic to support the National Action Plan’s implementation. In this regard, he explained how relevant sections of the Mission were achieving progress in building up Government capacities to prevent and reduce armed violence in areas such as disarmament, demobilization and reintegration; security sector reform; and gender affairs.

Mr. Kibeceri also welcomed UNREC’s related efforts on gender mainstreaming as a key opportunity to build working relationships at the country level. Thanks to recommendations from UNREC, the MINUSCA’s strategy now includes timely monitoring and reporting on gender-responsive actions and indicators. 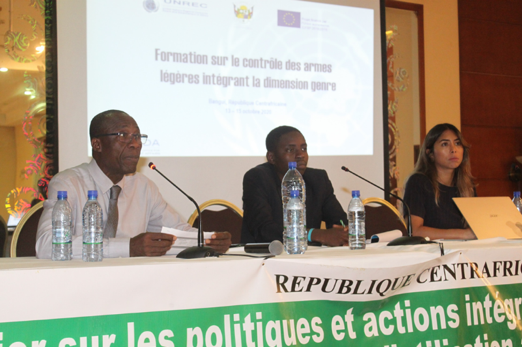 In moderated discussions during their second day of training, the participants considered how initiatives on civic participation and community outreach could be key to preventing proliferation and misuse of small arms and light weapons, especially in communities with low socioeconomic development that are at risk of conflict and violence.

Local members of IANSA, including representatives of women-led organizations and groups working in support of women, gave presentations on their work. They also encouraged Government officials to promote messages that highlight women as key actors in preventing armed violence.

In subsequent sessions on methods for programme monitoring, evaluation and learning, participants examined the need to involve diverse stakeholders in data collection and analysis, considering their different needs, positions and resources. As part of these sessions, they analyzed various model surveys and indicators for collecting sex and age-disaggregated data on arms control in the country.

Following the three-day training, participants took part in further discussions on priorities and follow-up activities, including the development of a strategic partnership between the National Commission for small arms and light weapons control and the Ministry for the Promotion of Women, Family and Child Protection.

More details on the workshop, including outcomes and recommended next steps, can be found in this UNREC infographic here.

The training was part of a multi-year effort to improve small arms control by addressing its gender dimensions and promoting a framework for women’s equitable and meaningful participation all related decision-making. UNREC implements the project in six African countries: Cameroon, Central African Republic, Democratic Republic of Congo, Mali, Rwanda and Sierra Leone.