Following its seizure of Mosul and surrounding areas in June 2014, the Islamic State of Iraq and the Levant (ISIL) instituted a pattern of sexual violence, slavery, abduction and human trafficking mainly targeting women and girls from minority communities, as a deliberate tactic of war to advance key strategic priorities. These strategic priorities include recruitment, fundraising (through the sale of women and girls in slave markets, the payment of ransoms by their families, and the transfer of women among groups); to enforce discipline and order through the punishment of dissenters or family members; and to advance their radical ideology. Ethnic and religious minorities the most targeted are the Yazidis and Turkmen Shiite. Sunni girls were also subject to forced marriages, particularly those who were affiliated to families with security force members. The Commission for Investigation and Gathering Evidence of the Kurdistan Regional Government, established in 2014, has to date (2019) recorded more than 1,000 cases of conflict-related sexual violence (CRSV). Civilians formerly held captive by ISIL in the Syrian Arab Republic, including survivors of CRSV, continued to return to Iraq throughout 2019. The Iraqi Presidency submitted a draft law on female Yazidi survivors in April 2019, calling for crimes committed against Yazidis to be considered as genocide and for the perpetrators to be held accountable. However, there are still no indictments for sexual violence committed by ISIL, only a a relief programme for Yazidi female survivors of ISIL was established in Iraq.

With the aim to enhance protection from CRSV and response to survivors and at-risk women and girls, this project provided comprehensive support to camp-based legal aid centres, operationalised five investigation units, provided legal aid and social services, and finalised all pending legal cases supported by the project partners. At the project’s close in 2018, the partners achieved a key milestone by implementing a gradual hand over to the Directorate for Combating Violence Against Women (DCVAW). This ensured uninterrupted service delivery by DCVAW to remaining camp-based internally displaced persons (IDPs).

For more information on this project, please go to UNA044

The SWPA was deployed within the office of the SRSG to support the implementation of UNAMI’s mandate on CRSV. The SWPA’s efforts were instrumental in establishing the Monitoring, Analysis and Reporting Arrangements (MARA) and bringing together members from different sections of UNAMI as well as UNDP, UNIFEM, UNCHR, UNICEF, UNFPA, UNODC, WHO and UNOPS. The SWPA conducted training for government officials, civil society representatives and round-table discussions with religious leaders on responding to CRSV. She strengthened partnerships within the UN and between the UN and government and religious leaders which led to better information gathering, analysis and reporting on CRSV by the UN, and ensured that addressing CRSV in Iraq was a national and international priority addressed in partnership with all relevant actors. This funding proved to be catalytic given that through joint advocacy by the SRSG-SVC with UNAMI’s leadership and engagement of Member States, the post was integrated into UNAMI’s mission budget for 2018/19.

For more information on this project, please go to UNA048

Coordinated action to respond to the needs of child born of rape, children born to ISIL fighters, and their survivor mothers

The project aimed to support the government’s commitments made in the 2016 Joint Communiqué. It contributed to enhancing the knowledge and the evidence base on the situation of children born of rape and individuals perceived as having affiliations with ISIL (conduction and dissemination of two key studies). The resulting draft plan recommended covering three major areas for improvement (legal and policy reform, access to civil documentation and Mental Health and Psychosocial Support (MHPSS) services, and community awareness-raising to assist social reintegration of children born of rape and to those with perceived affiliations to ISIL). The partners are expected to present the plan for consideration by high-level government and civil society organisations in 2020. Project partners have also engaged with several Ministries and the Judicial Council to advocate for mobile legal clinic and birth registration services.

For more information on this project, please go to UNA053

The project played a crucial role in improving conditions for the development and implementation of interim victim assistance and comprehensive reparations measures for CRSV survivors in Iraq by increasing the prominence of these issues amongst government and non-governmental actors; increasing the engagement and interaction of all relevant stakeholders, including government institutions, civil society actors, and survivor representatives, on reparations models; and enhancing the capacity of stakeholders to engage in meaningful deliberations on survivors-centred reparations models for CRSV survivors. Overall, the project was successful at increasing the availability of information and raising awareness amongst the affected communities on existing support services and the right to reparations provision. 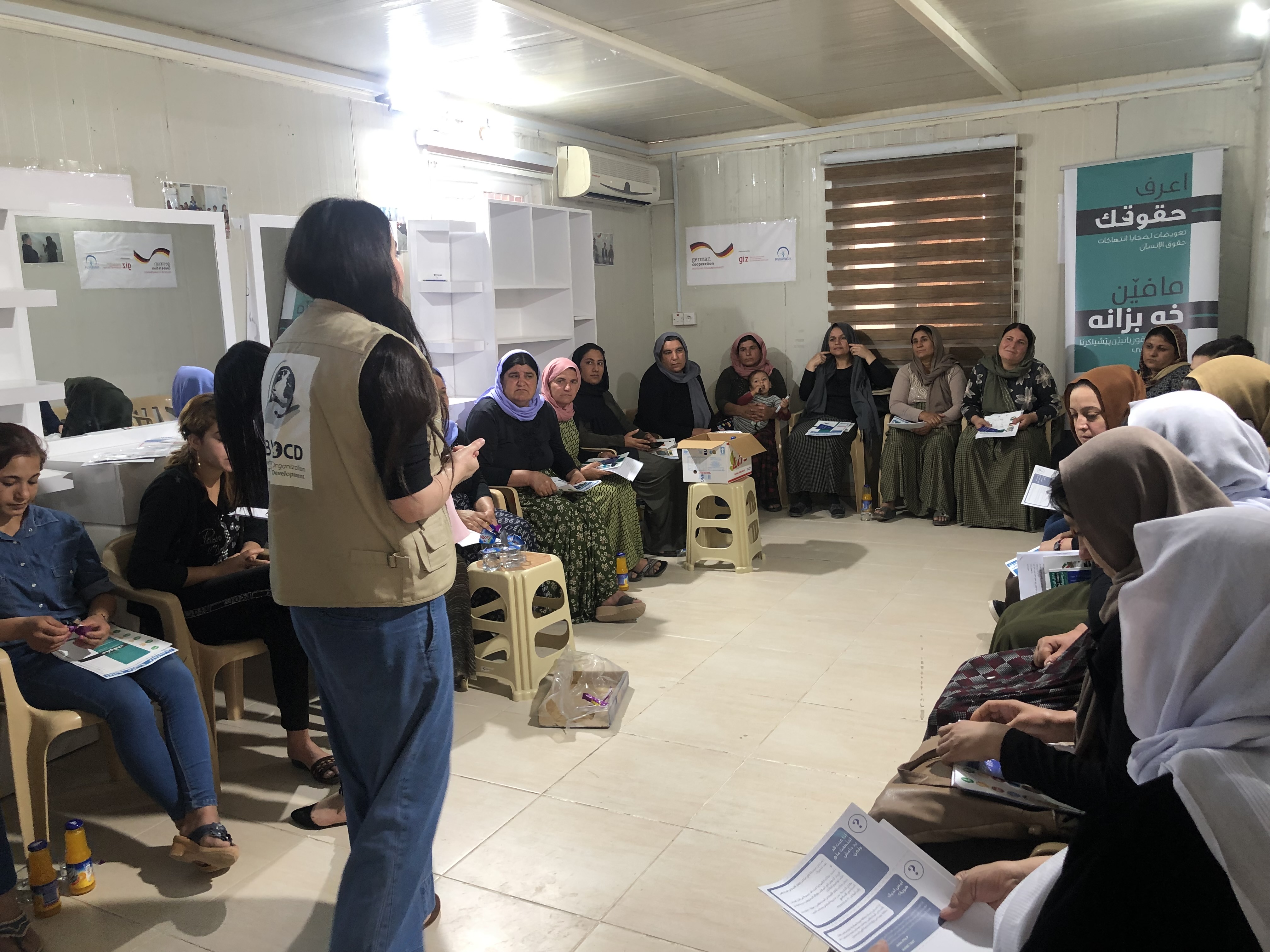 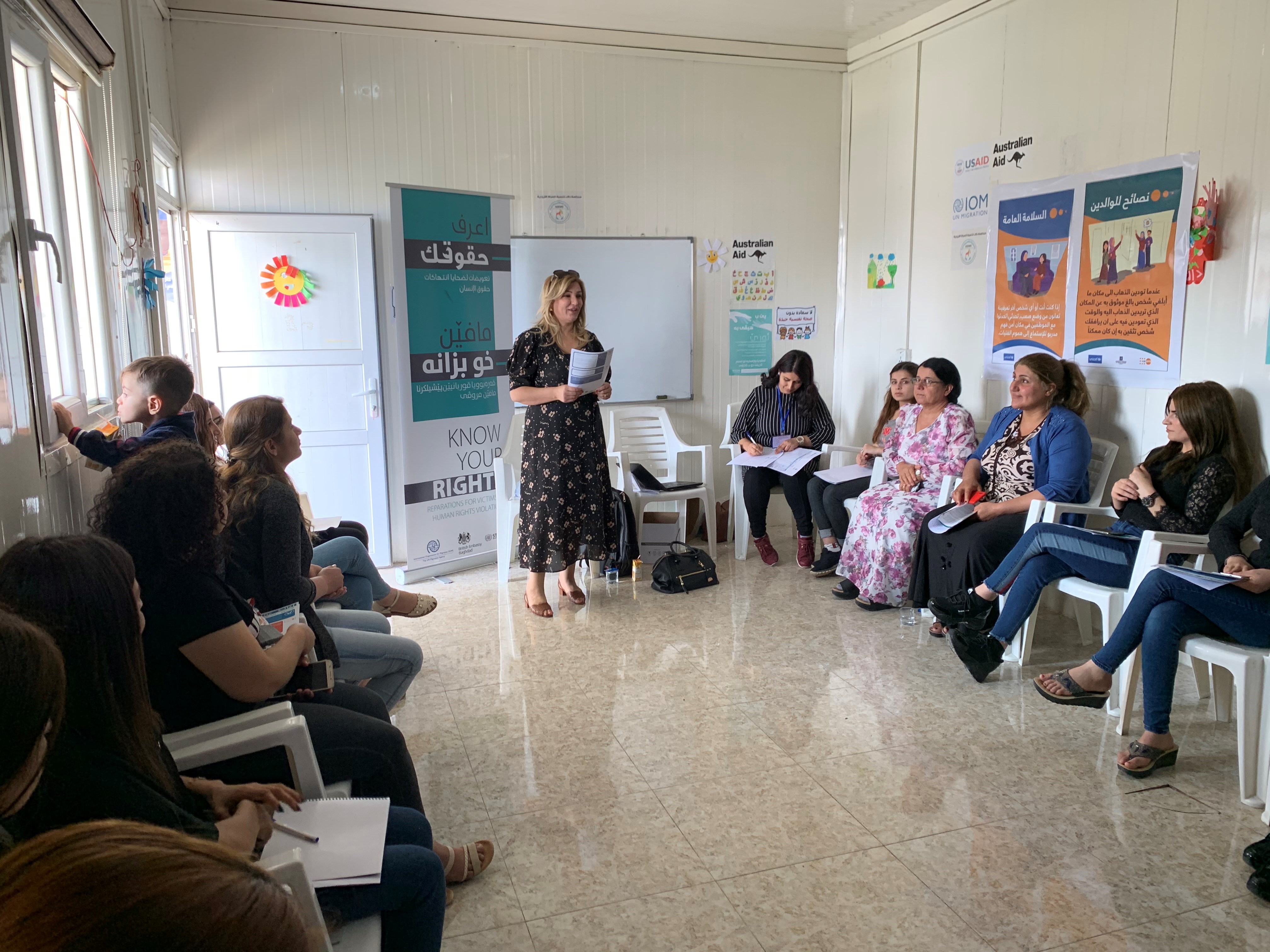 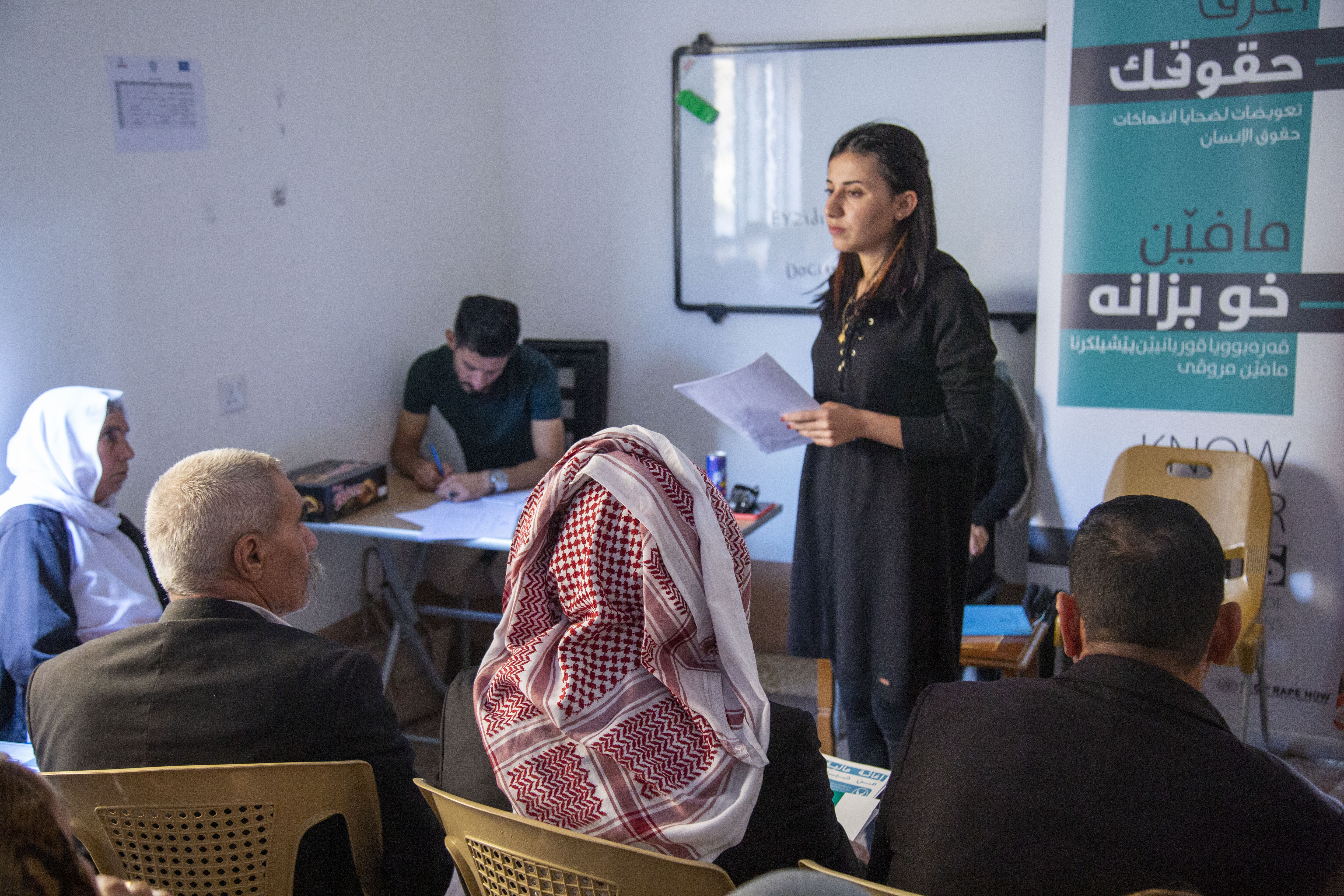 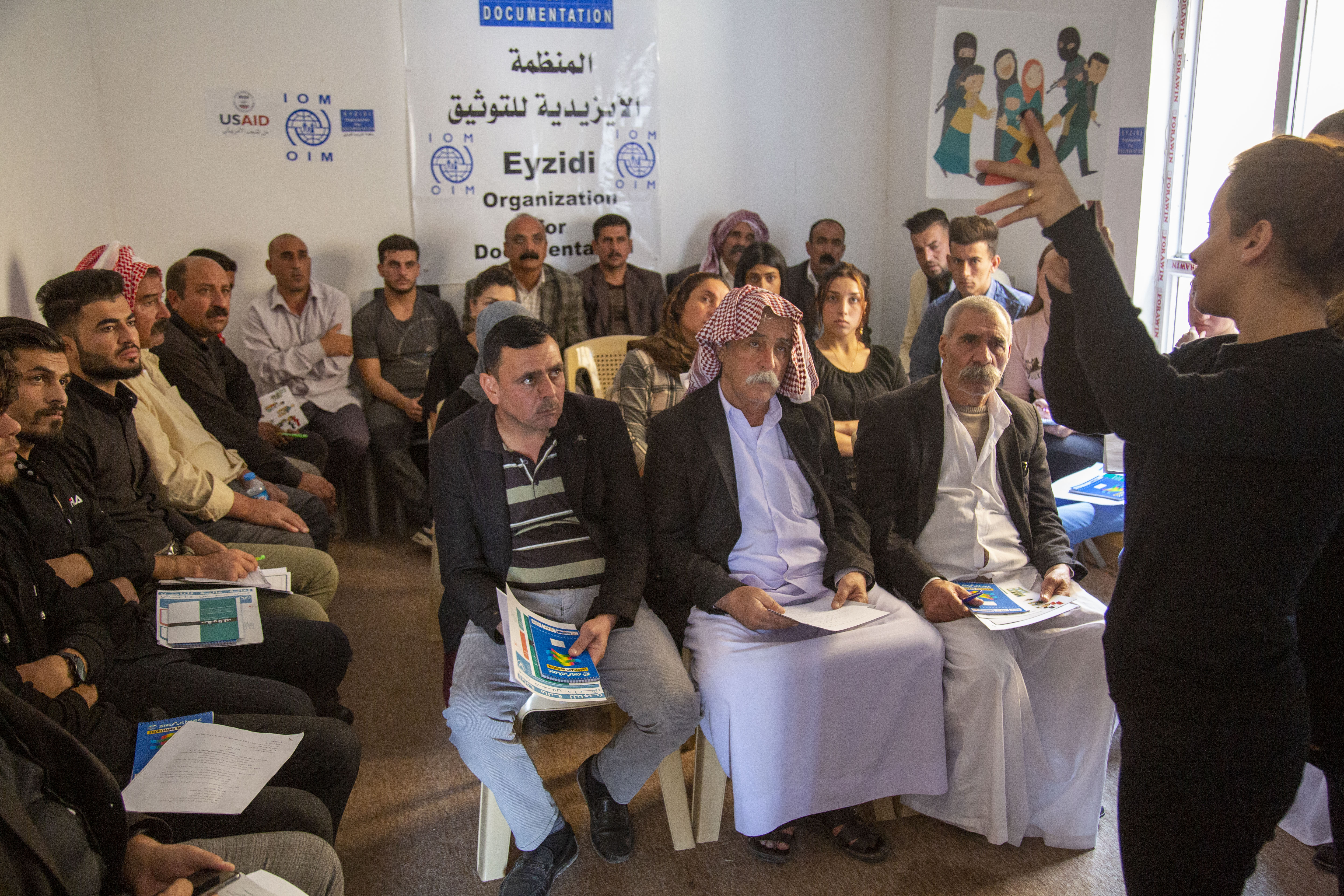 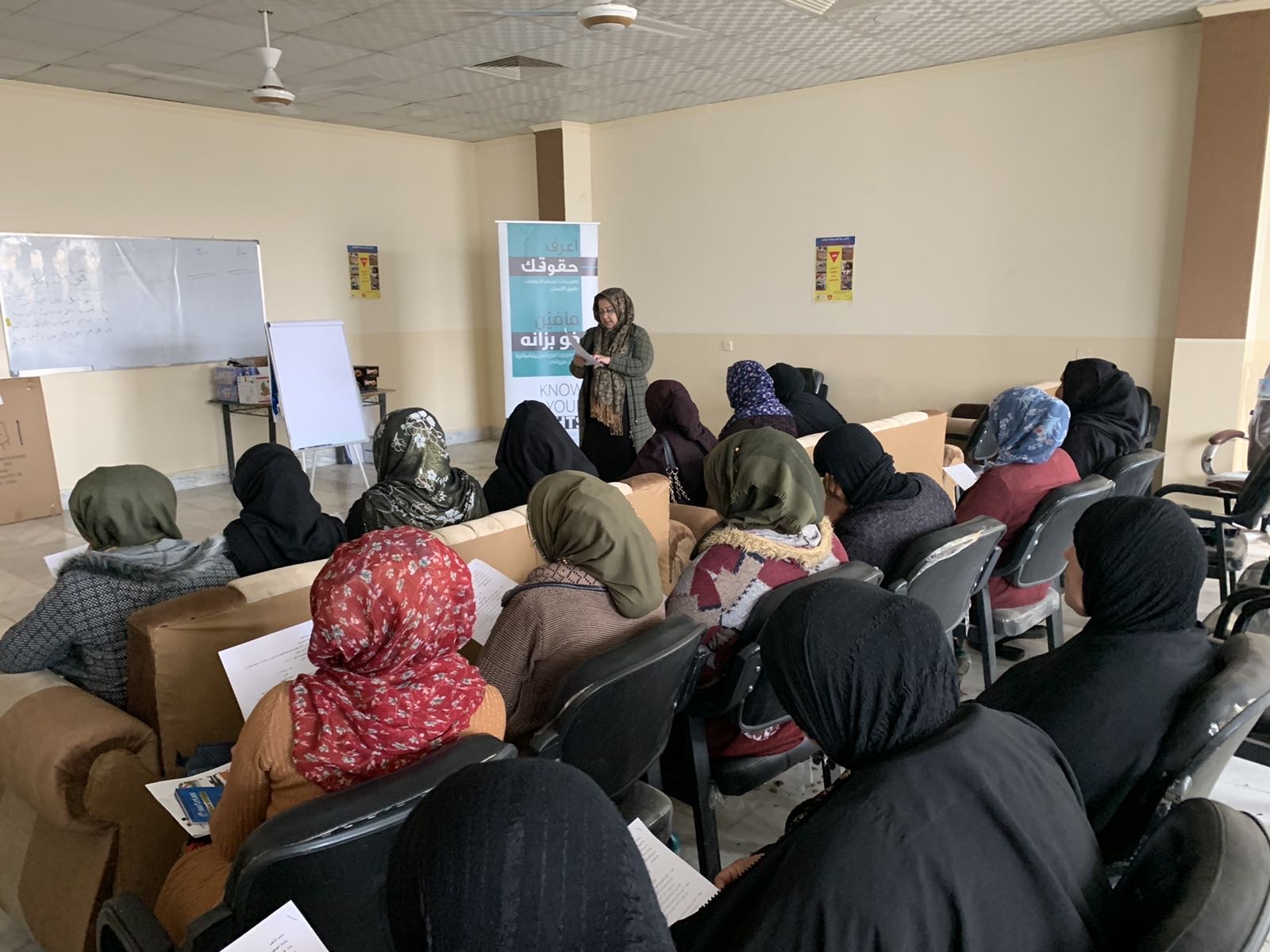 For more information on this project, please go to UNA057

Improving quality and effective management of GBV mitigation and response services, particularly MHPSS, and training of armed actors in Iraq

In order to address the critical role of MHPSS for GBV service providers, the project partners worked with an international MHPSS specialist to assess the capacity and needs of service providers, to define an action plan, design related training modules, and finally to conduct specific capacity building and coaching activities with selected actors dealing with GBV survivors, including CRSV survivors. The project also improved the knowledge and capacity of Iraqi uniformed and armed actors in terms of GBV prevention and response including through trainings on GBV case management. Other achievements included the development of specialised training manual and modules targeting Border Guard Police, Federal Police and the Iraqi Security Forces.

For more information on this project, please go to UNA058

Joint Communiqué between the Republic of Iraq and the United Nations on Prevention and Response to Conflict-Related Sexual Violence, signed in September 2016

Supporting Survivors of Sexual Violence in War: A closer look at the work of a UN Senior Women Protection Officer